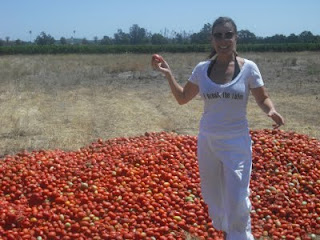 Tomatina is the world’s biggest tomato fight held the last Wednesday in Spain every August.
One hundred metric tons of tomatoes are used in Spain for their forty thousand participants. Our scaled down version in honor of pal AJ’s fortieth birthday used fourteen thousand pounds for our three hundred competitors. Impressive numbers for sleepy Sonoma.
The rules were simple:
You had to wear goggles.
You had to wear white
You could only throw the tomatoes you crushed in your hand first.
No aiming for the head.
There are over ten thousand varieties of tomatoes. In Spain they use specially grown tomatoes that are not intended for consumption. Romas were our weapons.
I am the first to say I am a terrible shot. I hurled twenty juice bombs at my friend Steve and none hit my target. I learned later that even seasoned athletes had difficulty making contact. Over-ripe tomato pulp is hard to hurl.
You’d be surprised how fast fourteen thousand pounds of tomatoes can disappear. We were finished in ten minutes, other than tomato wrestling, which is a definite improvement over the mud version.
My YouTube video is attached to this post.
Same time next year. Can’t wait.

The official Tomatina site: http://www.tomatina.es/
My YouTube video of the tomato fight: http://www.youtube.com/watch?v=O69I-td4X1Q July 9, 2016
Previous Post Germy And Germies
Next Post What Does Your Car Tire And Champagne Have In Common?